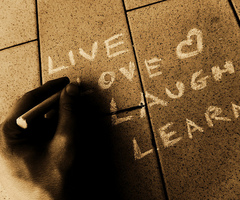 Have you ever had a meeting go horribly wrong?  Yesterday, I went to a meeting during my lunch break and had to wait 40 minutes before the person I was waiting for arrived.  When he got there,  I told him I had to leave right away and he seemed upset at me.   Nothing that needed to get fixed got fixed and I left feeling really down and defeated.   The whole drive back to work I just kept dwelling on the meeting and kept sinking more and more into a pity party.  That’s when I had to remind myself…

If the situations in your life determine when you are happy, sad, depressed, then you are going to go through an emotional roller coaster for the rest of your life and will just dwell on the negative things in your life.  When I compare my meeting to the person who has just been told they only have 6 months to live, then my meeting does not seem so bad.

25 Around midnight Paul and Silas were praying and singing hymns to God, and the other prisoners were listening. 26 Suddenly, there was a massive earthquake, and the prison was shaken to its foundations. All the doors immediately flew open, and the chains of every prisoner fell off! 27 The jailer woke up to see the prison doors wide open. He assumed the prisoners had escaped, so he drew his sword to kill himself. 28 But Paul shouted to him, “Stop! Don’t kill yourself! We are all here!”

29 The jailer called for lights and ran to the dungeon and fell down trembling before Paul and Silas. 30 Then he brought them out and asked, “Sirs, what must I do to be saved?”

31 They replied, “Believe in the Lord Jesus and you will be saved, along with everyone in your household.” 32 And they shared the word of the Lord with him and with all who lived in his household. 33 Even at that hour of the night, the jailer cared for them and washed their wounds. Then he and everyone in his household were immediately baptized. 34 He brought them into his house and set a meal before them, and he and his entire household rejoiced because they all believed in God

Paul had every reason to throw a pity party.  Here he is working for God and what happens, he gets thrown in jail!   I’ve never been to jail, but I am not sure if my first thoughts would be to sign Amazing Grace or In Christ Alone, but that’s what Paul and Silas do.  They understood that God is bigger than the outward situations.  They could of spent all night blaming God, focus on the pain of their wounds, or been afraid for their safety.

Instead, they prayed and praised God.   When you invite God into every situation of your life, he is going to use you in incredible ways.  The jailer who thought he was a dead man walking found himself living  a new life with Jesus all because Pail and Silas did not let their outward situations determine their inner joy.   So, when you have the meeting from hell, get thrown in jail, or even get cut off, how are you going to respond?   Are you going to focus on God or are you going to focus on you’re pity party?

“No one can make you feel inferior without your consent.”  – Eleanor Roosevelt, ‘This Is My Story,’ 1937

Eleanor Roosevelt’s wise words are one of my all time favorite  quotes.   Life after college means taking ownership of your life.   You can chase after your passions or you can settle.  Sure student loan payments, car payments, rent, insurance, phone bills, and the question “So what are you going to do with your life?” haunt you at night, but at the end of the day, you have power over your life and your life alone.   No one can make you feel inferior without your consent, but life will walk all over you if you give it permission.

I’ve been blessed with a mentor who has invested into my life and is teaching me the importance of believing in myself.  For years my identity has been made of outward things (my school, my title, my friends) but those are all masks and until you are proud of who you are and confident that God made you who you are, you will keep searching for new masks to cover you.   Remember Psalm 139:

O Lord, you have examined my heart
and know everything about me.
2 You know when I sit down or stand up.
You know my thoughts even when I’m far away.
3 You see me when I travel
and when I rest at home.
You know everything I do.
4 You know what I am going to say
even before I say it, Lord.
5 You go before me and follow me.
You place your hand of blessing on my head.
6 Such knowledge is too wonderful for me,
too great for me to understand!

7 I can never escape from your Spirit!
I can never get away from your presence!
8 If I go up to heaven, you are there;
if I go down to the grave, you are there.
9 If I ride the wings of the morning,
if I dwell by the farthest oceans,
10 even there your hand will guide me,
and your strength will support me.
11 I could ask the darkness to hide me
and the light around me to become night—
12     but even in darkness I cannot hide from you.
To you the night shines as bright as day.
Darkness and light are the same to you.

13 You made all the delicate, inner parts of my body
and knit me together in my mother’s womb.
14 Thank you for making me so wonderfully complex!
Your workmanship is marvelous—how well I know it.
15 You watched me as I was being formed in utter seclusion,
as I was woven together in the dark of the womb.
16 You saw me before I was born.
Every day of my life was recorded in your book.
Every moment was laid out
before a single day had passed.

17 How precious are your thoughts about me, O God.
They cannot be numbered!
18 I can’t even count them;
they outnumber the grains of sand!
And when I wake up,
you are still with me!

So you have to ask yourself are you going to hide from the world, not chase after the passions that God has given you, or are you going to go for it?  It’s your call, No one can make you feel inferior without your consent!